Seeing is Believing: the impact clearly shows the bullet did not come from behind but rather from right-front.
November 24, 2013
Update: March 14, 2017

My investigation of the killing of Martin Luther King Jr. led
me to the killings of JFK, RFK, John Lennon and the attempted
assassination of President Ronald Reagan.


THE JFK ASSASSINATION: In the Light of Day
(Special Investigator Gary Revel)

After spending the last week seeing and hearing the onslaught of lies perpetrated by news, publishing and broadcast companies about the JFK assassination I realized that I am compelled to clear the air.

The fact is that the US Government did an investigation of the JFK assassination and found that it most likely wasn't the work of Lee Harvey Oswald in a lone-gunman executed action.

The House of Representatives formed the House Select Committee on Assassinations in 1976 that authorized the investigation of the JFK assassination as well as the MLK assassination. All of the investigators who worked for the committee or in association with it found that they were prevented from getting to the full truth of the entire matter. Agencies of our government including the FBI and CIA destroyed, tampered with and hid evidence in both cases. Many witnesses were murdered or died mysteriously and sometimes just before some revealing testimony or expository event was to take place.

One most disturbing fact was how J. Edgar Hoover had written to the State Department in 1960 that someone "accessed" Lee Harvey Oswald's birth certificate and might be using it to impersonate him. Later, in 1963, we find that Oswald was being paid a monthly stipend from the FBI as an informant. Among other facts that led me to look further for others being involved was a meeting between Cuba's Fidel Castro and Jean Daniel. During the 6 hour meeting in Daniel's hotel room in Havana, Cuba, Castro was candid in his admiration and appreciation of JFK.

This was on November 19, 1963 when Castro proclaimed, "He still has the possibility of becoming, in the eyes of history, the greatest President of the United States, the leader who may at last understand that there can be coexistence between capitalists and socialists, even in the Americas. He would then be an even greater president than Lincoln," 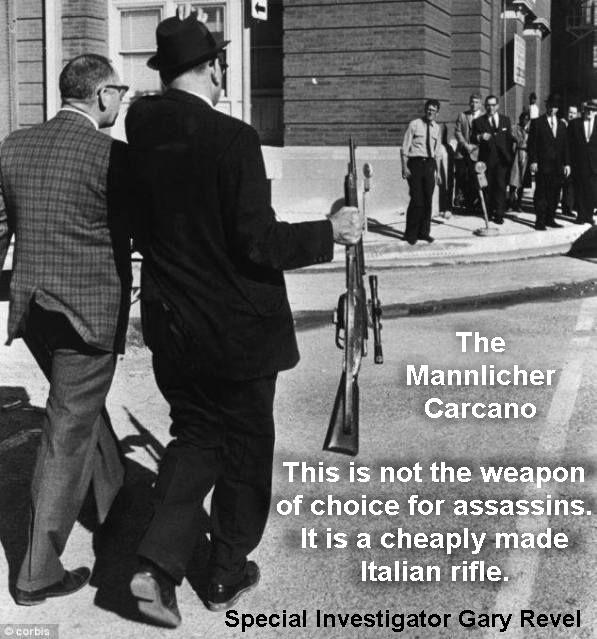 This is not a smoking gun but clear and present evidence that JFK was on a path that many in Federal Agencies and Departments (DOD, FBI, CIA) considered dangerous and threatening to our National Security.

If this were an isolated example it might easily be dismissed but numerous declassified documents now provide remarkable and focused evidence that the CIA along with top Federal officials and corporate entities worked together with Organized Crime to eliminate their greatest threat at the time who just happened to be our own President.

JFK and his supporters were constantly holding back those who wanted to start a nuclear war. Coming away from meetings at the Pentagon Kennedy would address the issue forthrightly and hold fast to his choice of diplomacy versus military action in dealing with the Soviet Union and Soviet Chairman Nikita Khrushchev as well as Cuba and Fidel Castro.

JFK remembered the 1961 warning in President Dwight D. Eisenhower's last address upon leaving the White House. "Our military organization today bears little relation to that known by any of my predecessors in peacetime, or indeed by the fighting men of World War II or Korea.... In the councils of government, we must guard against the acquisition of unwarranted influence, whether sought or unsought, by the military-industrial complex.... We must never let the weight of this combination endanger our liberties or democratic processes. We should take nothing for granted."

Our military planners have contingency plans. When JFK became President one of those was a preemptive nuclear attack on the Soviet Union. Many in the military, intelligence and military-industrial arenas voiced their support and recommendations of this plan. It was considered by them the complete and total solution to establishing the United States as THE WORLD POWER for all time. Insiders told me that supporters of this plan worked daily to set up international conflict and confrontation that could lead to the acceptance of the American people of such a strike. This included using publishers and news organizations to manage propaganda that aided in the overall success of such an operation.

Plans included military attacks on US vessels and even US soil set up to appear as if the attacks came from Cuba or the Soviets but in fact were perpetrated by our own contracted Mafioso associates or covert operatives. Once the attack was launched and America's news machine went to work trumpeting the news to the American people a retaliation would have been necessary and politically expedient.

Before I go further I must write that I do not rebuke those who honestly and earnestly believe Oswald killed JFK. The effort to execute our President, cover it up and convince those needed to further the plot, that it was a lone-gunman event, was successful for the most part. If you are one of those so convinced I totally understand and simply point out that you too, was one of the victims of the overall criminal operation.

Part of the reality of that world was that the CIA, and others, were entirely convinced that Soviet leaders were absolutely evil, beyond redemption and we, as the good guys, must remove them from the world stage. This reality was never clearer than in a meeting with his Joint Chiefs of Staff in 1963 when the hawks pressed for a preemptive nuclear strike only to have Kennedy question the results and show concern for the loss of life of Americans; then to their disdain he simply left the meeting; not giving in to their thirst for war.

A vital component of this scenario certainly is the 'Heroin Pipeline'. The Mafia grossed an average of 30 billion dollars a year throughout the 1960's as a result of heroin being brought to the United States and Europe from Burma/Myanmar. This cash cow was overseen by Meyer Lansky, the Mob Banker, and much of it used to bribe and corrupt US Government officials. The Vietnam War was used as a cover for this operation with most of the illegal drug distribution coming down the Mekong River and then being shipped or flown to America's shores. Without powerful US military forces being in the region the effectiveness of the distribution network would have suffered insurmountable competition from others. Illegal drug business in association with Organized Crime was an admitted 'Dirty Tricks'-covert operation of the CIA for many years. The black market weapons business was another important part of Organized Crimes need for the Vietnam War. An interesting relationship between the CIA and the FBI was managed by CIA-Liason Richard Ober and was specifically assigned to control security risks to our nation's government, even those found to be domestic and that were determined to be adversarial and/or subversive in nature.

JFK's and Attorney General Robert Kennedy's quest for peace and their war against the Mafia was unwelcome and unacceptable to their enemies, even many in their own party, including then Vice-President Lyndon Baines Johnson.

Their dreams of a better America was lost and everything changed on November 22, 1963 when JFK's brains were splattered onto the Presidential Limousine and the clothing of First Lady Jackie Kennedy. On that day began the push for a complete acceptance of the 'Lone Gunman Theory' without real evidence to prove it and the end of a complete trust in government. A comprehensive study of the Warren Report along with all the new evidence that has come from the CIA's Family Jewels and thousands of other relevant government documents and files has since proven that we are justified in that lack of trust.
*******

Zorro: The Plot that Killed King ... Patrick Wood brings the hidden details of the 1977 Gary Revel investigation of the assassination of Martin Luther King JR. to light. He is writing and publishing "ZORRO: THE PLOT THAT KILLED KING" in chapters in a way that brings to life the intimacy of Gary's dangerous quest of finding the truth and more. To begin your own personal journey Click Here to Read.