Seeing is Believing: the impact clearly shows the bullet did not come from behind but rather from right-front.
February 18, 2014
New York, New York USA

INTERVIEW WITH AUTHOR BARRY ERNEST
'THE GIRL ON THE STAIRS:
The Search for a Missing Witness to the JFK Assassination'

A silent witness is heard at last. It required 35 years of painstakingly diligent searching to uncover Victoria Adams, a key witness to the JFK assassination, and her story. Adams was on the staircase of the Texas School Book Depository at the precise moment that Lee Harvey Oswald, according to the Warren Commission, was making his escape-yet she saw no one. Badgered by the Commission and fearing for her life, Adams vanished into obscurity. At long last, her story has been brought to light and forces us to reconsider one of the most controversial assassinations of the 20th century. 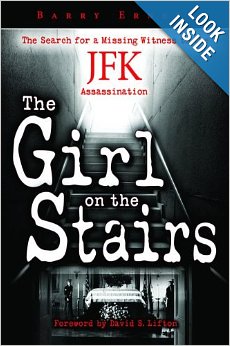 Barry Ernest is an author and former investigative journalist. He served in the US Navy as a radar man aboard the aircraft carrier USS Franklin D. Roosevelt. Following his time in the service, he graduated from Point Park University in Pittsburgh. Ernest worked as a staff writer for the York (PA) Sunday News and the Syracuse (NY) Herald-Journal and Sunday Herald-American. He is a former press secretary and director of communications for the state of Pennsylvania. Passionate about finding the truth in the assassination of Pres. John F. Kennedy, Ernest began his search for Victoria Adams in 1967. He frequently lectures on the topic and is the recipient of the 2011 Mary Ferrell Pioneer Award, a national honor presented for a lifetime of searching for the truth in the event that changed our country forever. Ernest resides with his wife in Harrisburg, Pennsylvania.